One of our most well traveled CRC regulars, Jennifer, found herself in Russia on business and was kind enough to share her unique perspective of a KHL game through the eyes of an NHL fan.

A big thank you to Jennifer for her fascinating contribution! 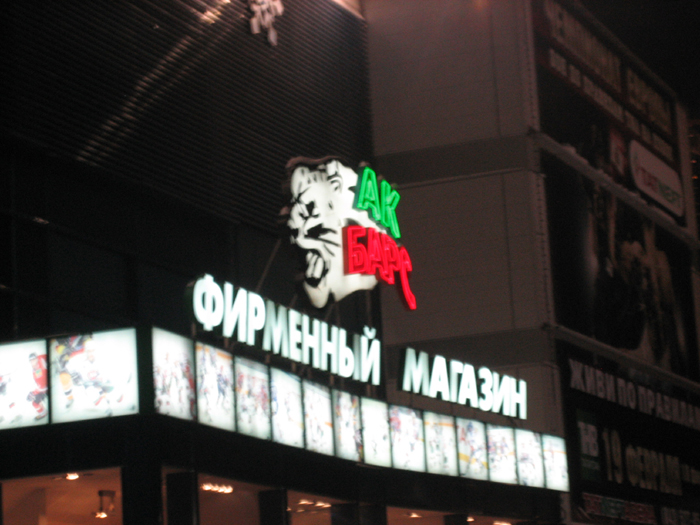 Traffic came to a stop throughout Kazan as the clock neared seven. The Ak Bars (snow leopards) are leading their division, second overall in the KHL, and you can smell the playoffs on the snowy breeze as the crowds pour into the dedicated stadium near the Volga. The team’s primary sponsor, a local oil company, maintains a flagship gas station right down front. My hosts from the local Customs office had arranged tickets, and the three of us reached our seats seconds before the puck dropped.

The arena has a capacity about the size of the lower bowl of the Verizon Center, and the halls are decorated with murals of hockey players in action and puck clocks. Soldiers in heavy wool coats stand guard at the entrances. For the most part, stony-faced Russians wear their dark coats throughout the game. Only one entire section–the fan club–stands, drums, shouts, claps, and jumps throughout in their white team jerseys, reminiscent of a soccer match. There is no cowbell, but several players have kazoos and many wave full-size flags in time with the drums. When the camera scans the crowd, most wave quickly and then look away; there is little showboating. Some things are universal: crowds love a cute kid with an ice cream cone.

Those who resent the low-key Red Rockers in their spandex pants would be appalled at the dance squad that stays in a steady, leggy, explicit motion on a stage behind one of the goaltenders, gyrating and hair-tossing in perfect time to familiar pop tunes. In today’s game, they traded their first-period fuchsia spandex get-ups (including berets) for gold go-go boots and backless chartreuse mini-mini dresses in the second period, and a somewhat more traditional, if skimpier, sporty, cheerleader-style mini outfit, complete with stylish knee pads, in the third.

Overall, the stadium is relatively quiet, but the noise grows as the teams race from end to end, as players break away, as pucks are stolen and passes missed egregiously, and as the visiting attacker finds the goalie’s back door on the third try in a flurry of attempts. There were few checks (maybe one or two, tops) and no fights. The Ak Bars suffer from some of the same problems as the Caps: too many penalties, playing cute, and occasionally sloppy passes.

Of all the hockey vocabulary I picked up, my favorite new term is the Russian word for ‘enforcer.’ It is “tuffguy”. Really.

The highlight play may have been near the end of the third, when a home team player in a green jersey cleverly used his stick to steal the puck from a visitor at the blue line and skated it to a tie-breaking goal with three minutes remaining in the game. An empty net goal in the final minute cinched the deal, and the building emptied joyously into the cold winter night.

Have you taken a hockey-related trip that you would like to share with your fellow Caps fans? Send an email to info@capsroadcrew.com and your story may be included in our Reports from the Road!
The opinions expressed in this “Report from the Road” are those of the author(s) and do not reflect those of the Caps Road Crew.